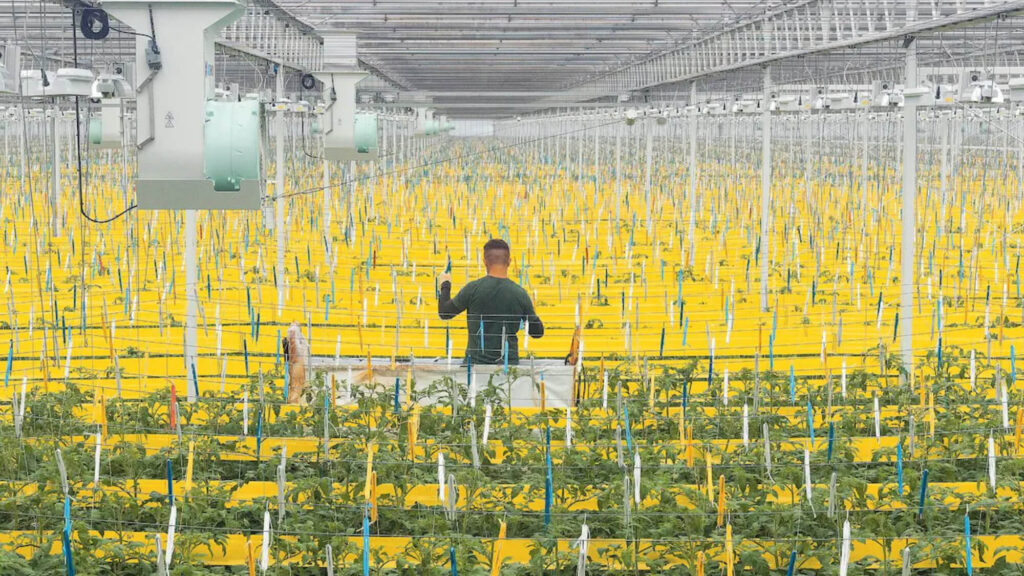 The world will need to feed 10 billion people over the next century. A greenhouse in Holland could hold the key to that.

On a dull morning in April, with chilly drizzle falling from a grey sky, it is possible to think of more promising places to grow tomatoes than the fields outside Delft, in south-west Holland. The headquarters of Duijvestijn Tomaten – in English, Duijvestijn Tomatoes – is an unprepossessing facility, where roads designed for trucks lead to vast greenhouses, around 12 metres high and hundreds of metres across. The Netherlands has an area almost twice the size of Manhattan under glass, of which Duijvestijn owns around 25 hectares, from which it produces 17 million kilograms of tomatoes per year.

I am greeted by Roos Zurel, the company’s head of communications, who has made it clear by email that they take their tomatoes seriously. Biosecurity is tight. Disease here could devastate a harvest and a new virus, tomato brown rugose fruit virus, has been spreading across Europe over the past couple of years. We switch into white disposable suits, secure our phones in small plastic bags and disinfect our shoes, then step inside.

The air is thick with the smell of tomatoes and the sound of bumblebees, employed as pollinators. A long corridor bisects the greenhouse, with hundreds of rows of plants stretching off on either side, stretching to about 10ft high. By the end of the season, these plants will be 12 metres (39ft) tall, their stalks pulled ever upwards to allow the fruit at the bottom to ripen and mature.

In this greenhouse, which relies on sunlight, April is harvest season. (At the greenhouse next door, which relies on LED, the picking starts in autumn.) Pickers – a mixture of Dutch and other Europeans – make their way cheerfully down the tomato aisles, examining the fruits for redness, firmness and signs of illness, snipping them or leaving them accordingly.

One, Mariens, a student in her 20s, says she has been doing this for three years while she finishes a degree. She shows me how she identifies tomatoes that are ready. To the untrained eye, they all look comparably tomato-ish. Within 48 hours, some of these fruits will be packaged on site, shipped out and available in a Sainsbury’s – to which Duijvestijn sends roughly a quarter of its product, less since Brexit – near you.

Duijvestijn was founded in 1935 and started out growing other crops, including cucumbers and lettuces, but pivoted to focus on tomatoes in 1963. Since then, it has grown steadily to be at the forefront of global tomato technology. Its story echoes the wider trajectory of farming in Holland, a remarkable tale in which certain fruits, vegetables and flowers have been stretched to the limits of their known potential and beyond, with innovations that have spread around the world.

The history of Duijvestijn has been a history of power sources. In 1988 Leo Duijvestijn handed over the business to his four sons, Ted, Peter, Ronald and Remco, who have overseen its modernisation.

‘Energy has always been the focus point of this company, because that’s the reason plants grow,’ says Ted, a wry and avuncular figure in a colourful checked shirt and jeans, in an office overlooking his kingdom. ‘We build the rest around it. When I was a boy the greenhouses were heated by coal, then we transitioned to oil and gas. But the geothermal heat pump had the most impact on me. I’ll never forget the moment when I first saw the hot water coming up out of the ground.’

These days, there is nothing as crass as soil here. The plants are rooted in a mineral rootstock. Temperature is controlled by radiator pipes, powered mostly by geothermal energy to maintain an optimal growing temperature of around 19 degrees. Rainwater is collected on the roof to be dripped in automatically. Each kilogram of tomatoes needs less than four gallons of water, compared to 16 gallons in open fields. Along the bottom of each row lies a tube where additional carbon dioxide can be supplied for the plants to draw on: there are so many in the room that otherwise there wouldn’t be enough CO2 to go around.

Since the company does not use fossil fuels to heat its greenhouses, they use residual carbon dioxide from other companies where it is a waste product of industrial processes (thus saving it from being released into the atmosphere). Sensors control ventilation in the ceiling, where lights are suspended. After years of experimentation, plant scientists found a combination of red and blue lights to be optimum for growing. The advent of LEDs was helpful for reducing energy usage. At the end of one row is an experimental robot picker, which might soon replace humans. Drones and AI may offer the chance for plants to be monitored individually.

As it has expanded, Duijvestijn has taken on more and more specialised staff. The current CEO, Ad van Adrichem, the son of a cucumber grower, was initially brought on to help with the move to a new greenhouse but rose through the ranks and is now one of the shareholders, along with the Duijvestijn brothers. In 2015, the firm was awarded the title of ‘Best Tomato Grower in the World’. They were among the first growers in the world to use geothermal energy to heat their greenhouses, saving up to nine million cubic metres of natural gas each year, and the first to use a double-insulated greenhouse, which uses 60 per cent less energy than a conventional one.

‘A field in Spain will yield roughly four kilograms of tomatoes per square metre per growing season,’ says Ernst van den Ende, a professor at Wageningen University, a school that has been at the forefront of Dutch success, and who ran its Plant Sciences group for 12 years. ‘In a top greenhouse in the Netherlands, that same square metre will produce 80 kilograms of tomatoes.’ While the world often focuses on yield, however, Dutch farmers have been pivoting to reducing their use of pesticides, water and energy. Yield has been steady over the past few years, after decades of growth, and top nations – the USA, Scandinavia, even the UK – have more or less caught up. Having worked out how to maximise the potential of the tomato, Dutch farmers are trying to work out how to feed the world sustainably.

‘The best part of the story is because we grow under controlled conditions, we can use biological controls. There are hardly any pesticides used in greenhouse production, but it’s also more efficient with water.’ Speak to van den Ende, and the team at Duijvestijn, and it’s clear they believe they are only at the start of a thrilling new phase for tomatoes. ‘At Duijvestijn we test more than 200 new varieties each year – taste and quality are very important criteria when assessing new varieties,’ says Roos Zurel. ‘These must be better than the current variety in order to even consider switching to a new one. Flavour has become more stable over the years and has increased in average over the whole category.’

They are aware of the problems that come with monocultural growing. Duijvestijn has its own biologists who monitor the balance in the greenhouse between insects that can harm tomato plants, and their predators. If necessary, these predators are introduced into the crop – in this way, biological control can be achieved.

While farming is the story of man’s harmony with nature, it is also a story of technological mastery. In that version of history, greenhouse drones, robotic pickers and AI-powered climate control are the next steps after the plough, irrigation and fertiliser.

Ted Duijvestijn’s father died two years ago, with the family firm riding high, and almost unrecognisable from the one he had inherited from his own father. ‘He was extremely proud of what we had done,’ Ted says. ‘But he didn’t understand the business by the end. It was a completely different type of farming.’

The challenges of the next century mean the inevitable expansion of businesses like Duijvestijn, and possibly consolidation with other growers. The questions are too big to be answered by single firms. ‘You need bigger companies to deal with big questions like biodiversity and water use, to make an impact,’ he says. ‘We’re doing everything to make all our practices circular and zero-waste. And we need to teach the younger generation that this is the only way to make the world healthier.’

The world will need to feed 10 billion people over the next century. The future might be Dutch orange – and tomato red.